I totally just thought of this as well.

A janitor in a school finds a piece of paper with a maths equation on the floor of reception. He goes and finds the head of department for maths and shows it to him and asks him whether he knows anything about it. The head of maths turns to him, looks at the paper and says quite bluntly,

'I'm sorry, but this literally isn't my problem'

gettit?
Posted by Calamity Teacher at 01:42 No comments:

We've all been there. We all know what it's like, to be sat, bored, tired and cradling a cup of tea or coffee as if letting it go will immediately condemn your soul to the very inky blackness that it reflects. Instead of the rage overflowing like your marking pile, why don't you get together with the other teachers that genuinely don't give a shit/actually see things for the way they are/aren't terrible people and play a little morning game to wake you up?

And with this in mind I present:

The game is simple.
Print out a game board then write out, or print out all of the game cards of all the things you might (will) see and hear in your morning briefing. Divvy up all of the cards and stick them on your game board. Then cross off the things that happen as they come up. Squares are one point, lines are ten points each, first to a full house wins automatically.

I suggest forfeits for losers such as a class set of marking, lunchtime duty, a round at the pub or death. 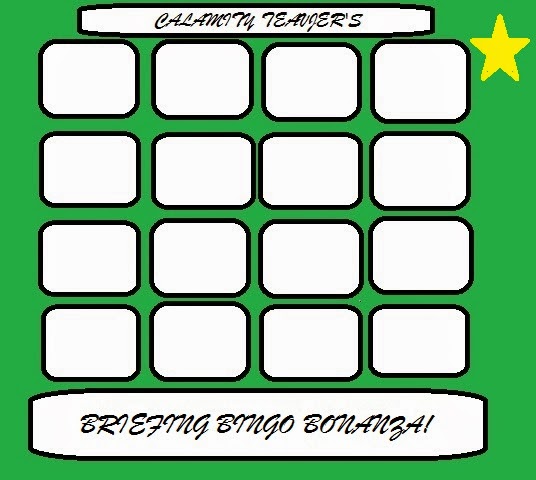 And here are your choices of briefing bingo bonanza . (I suggest you print out a few of each. and share them around) 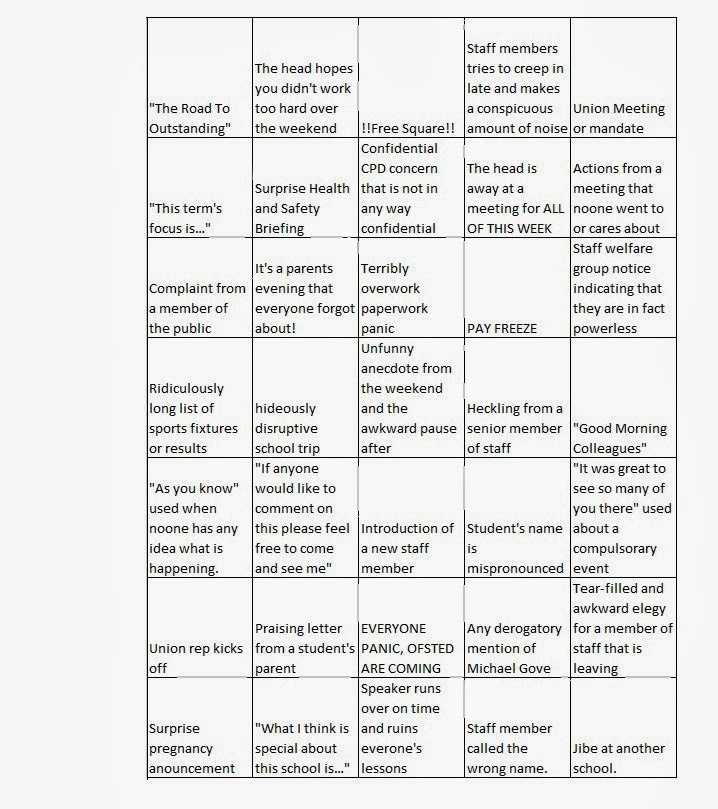 Please enjoy, and tell me how it goes on @calamityteacher Photos are always welcome!

Posted by Calamity Teacher at 10:06 No comments:

The Return to School Checklist

It's spring term eve, which means disney should be selling a special commemorative mouse or dog or something, but as my students don't love me enough to buy me gifts i will have to cry myself to sleep tonight. I would say that these tears falling onto the cardboard box I have used for a pillow since my Academy froze our pay in 1250BC are unusual, but it would be a lie to proffer any other idea than that which is true: I cry. A lot.

And through these tearstruck eyes that blinker the outside world from view I can just about read, written on the side of a sodden Amazon box, my list of tasks i need to complete before i return to the hallowed halls of hubris and hefting humanity that is my alleged work(house)place. I reproduce this, shoddily no doubt, here.

1: Wipe internet search history normal history, temporary files and any incriminating photos. Check the dvd tray for THAT film and possibly consider just defaulting the whole machine to factory settings or encasing it in concrete, dropping it into a river and claiming to IT tech that you lost it/left it in the back of a taxi.

3: Check that the new piercing/tattoo(s) can be covered by current haircut or work wardrobe.

4: Change out of the pajamas that you've been wearing for three solid weeks.

6: Practice not swearing at everything.

7: Practice getting up before midday.

10: Kiss goodbye to your loved ones/pets/photos of celebrities. You won't be seeing them until February.

11: Stock up on comfort food/booze/kleenex

12: Book that first counseling session of the year.

15: Fabricate a convincing cover story to tell in the staffroom/classroom to explain that scar.


There you go. Plenty to be getting on with. I'm going to pick out my wardrobe for the next few days so that i can essentially operate on autopilot.

Cheers. Here is to blessed, half-awake absolution.
Posted by Calamity Teacher at 08:54 1 comment:

Reasons to be excited about start of year INSETS:

Posted by Calamity Teacher at 03:31 No comments:

Are You Sure You Are In My Class?


Just before the end of term I was followed around by that most rarest of thing: A new teacher. This endangered species, under threat as it is by the scaremongering of the popular teaching press, the strong arm of the unions, and a tortoise on a pole, is a beautiful polished surface with which a teacher of some relative long-toothedness can reflect upon their own practice. I did reflect upon my own practice, and deemed that, in many ways, I am not quite as awful as I had previously believed.

There was one thing, however, that struck through my heart (and you’re to blame). I was sat, nonchalantly watching my pet new teacher with year ten and I looked at a student. This student was sat, quite quietly scribbling down notes, in a seat that I realised is in an almost total blind spot from my desk. She is a beautiful living stereotype of an invisible student: small, plain looking and quiet and as such, of course, I have no idea what her name is. Even with the register at hand I had difficulty choosing between two or three similar quiet girls. It required the expected us of the blessed class photo option on SIMS to finally identify her and, to be perfectly honest, even that was somewhat tough.

I think there is a lesson in this anonymity. Perhaps it should be common practice for every teacher to watch someone else teach their class purely so that they can spot the little eccentricities of daily class life that just fly their tiny wings underneath the radar. I teach, as I imagine many of you do, about 150 different, individual, hormonal, stinking,shrieking, bags of desperate flesh a week. It's easy to miss the nice quiet ones unless you look at them from a different angle.
Posted by Calamity Teacher at 15:38 1 comment:

We all know that term one is a total write-off. We all know that those two long terms are just a case of getting to the Christmas holidays with only a minimal amount of thrown chairs, swears and pulled out hairs, but next term, when the students are painfully subdued by the dark and the coming realisation that their lives are as insignificant as an individual aphid in a biology diagram, there is hope for us to, perhaps, prosper as individuals. @Badheadteacher (real name I am assured, changed by deed poll no doubt) has presented a list and I, as one to never leave a bandwagon unjumped upon, are duly following suit with my own convoluted and impassioned vacuous tripe:

Resolution number one: SCREW YOU DATA

This year I solemnly swear to ignore all data that does not actually matter. I will only take note of the following things that contain numbers:
1) The Time
2) GCSE results
3) Canteen Prices

I am outstanding teacher. I have no proof of this, and I require none. If  someone asks me to prove it then I will write myself a certificate, decorate it with stars and present it to the questioner by rubbing it, quite literally, into their headface.

I simply cannot afford it. I will exact this by avoiding situations where i could get fired, such as lessons, and school, entirely. This should keep me safe. I will hide under the bedclothes until the bad things go away.

Bonus Resolution: I will actually teach a child something that might actually help them in later life.