How To Build Your New Academy.

With all this new legislation, there is going to be an awful lot of new academies and free schools knocking around in the near future, and the rate they'll be getting through head teachers, you never know when you'll get the call up to the Big Chair.

Now we all know that the two most important things for a head about opening a new academy are six figure salaries getting your photo on the front page of the local dishrag and getting to design your own logos. In this heady 21st century world of myBook and friendFace branding is everything. The iPod generation treat their schools like they treat their, well, iPods. Every school needs to have a focus, a specialty, an ouvre. You have to stand out if you want to be on the front page on the TES.

Now, we know that we can't all be out-of-the-box, blue-sky thinkers; that's what we have educational consultants for. So, if you have all the creative talent of that year nine boy whose name you've forgotten, then you can use the table below to create a totally awesome corporate identity bound to impress the Department of Education like nothing you've ever seen.

Just follow the table down, selecting an option from each row and you'll find yourself with your perfect brand within minutes! 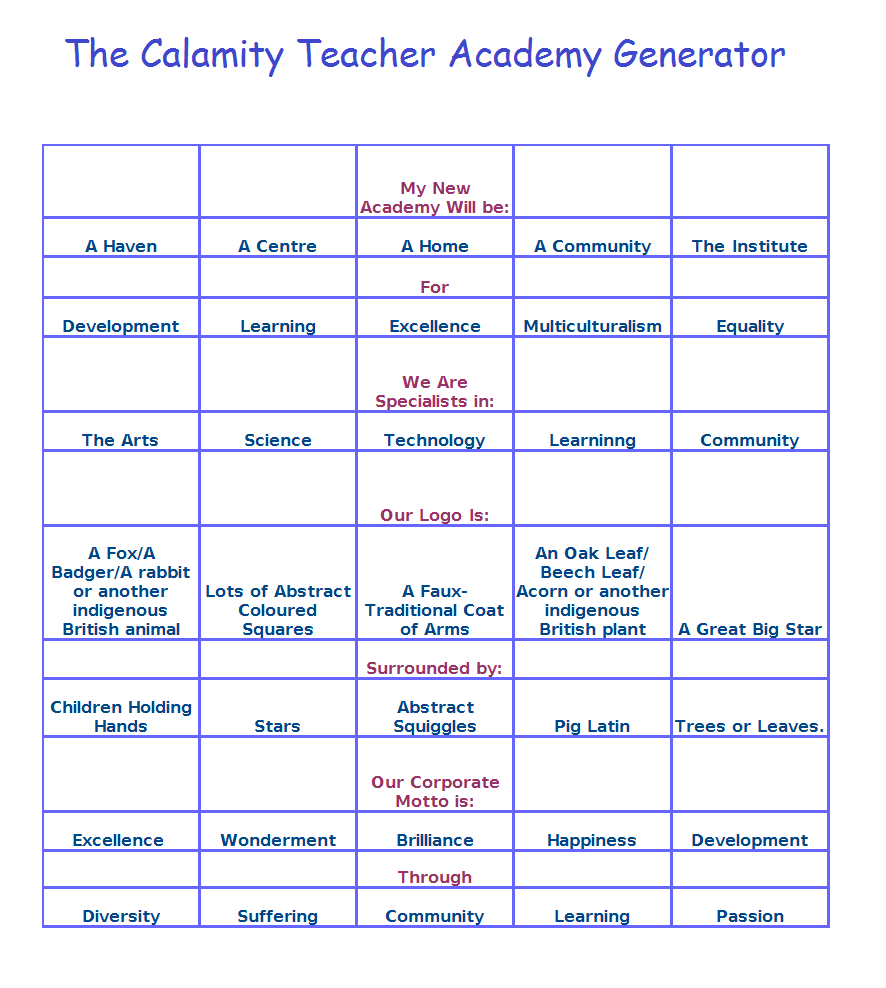 Thank you for your time and good bye, I'm afraid I'd write more but I have to go to a very important meeting about the opening of the West Medway Learning Community Multicultural Free Academy.
Posted by Calamity Teacher at 02:36 No comments:

How Many Letters are There in Head Teacher?

Yesterday I asked a non-teaching friend of mine a very pointed question. He didn't see the point because he didn't know the context until afterwards, but the question was this:

What is the lowest qualification you would need before you put it after your name on an email?

Interesting question, that. I thought, anyway. He thought a little, and we mulled, and I asked him a further question:

If you were the Head teacher of a school and your name was written on that school's sign, what is the lowest qualification you would need before you started listing them after your name?

He came to a reasonable consensus with himself that an MA was questionable but a PHD was a definite. At some point, I guess, that you are considering why I asked my embattled friend this set of traps entirely set to facilitate my own particular brand of oral diatribe. The seed of inspiration for these questions was my journey to University. I just happened to be stopped at a set of lights when, out of the corner of my eye, I noticed fine old building and happened upon, by virtue of its sign, the knowledge that this was a centre, nay, institution, intended for the education of the minds of those knee-high and circle-running. And there, in a place that I must say I was surprised that I had never seen it before, for, be it maybe tree-leef covered, it was bright blue and yellow and littered here and there with letters.

So I, knowing that my time at rest was limited by the lights, hastily took in the name of the school and its specialties and honours and then, half-hidden, but in clearplain sight, at the very base of the sign was, in prouder letters you could rarely see, the name of she whose charge the school was in. In big bright letters her name went on and then it went on again and then again it went on passed the normal place a name would be and there were letters on their own. Or perhaps best described as Letters; All capitals. BA (Hons) PGCE. And then the lights changed and I was on my sun-dappled way and in between trying best not to die, I wondered what possessed anyone to declare, loud, right there, the qualifications inherent to their occupation. I would think the gravitas of being Headmistress was enough. Is it not enough? Not enough to be excellent? Instead everyone who walks passed has to see that you did go to university and lo did you pass the very exams and essays and hurdles and forays that are required for your name to be on the board.

What makes me sad about this, and it really does make me sad, is it devalues the point of being a head teacher/principal/overlord. Headteachers are meant to be headteachers because they are really fucking good at developing students. Ooooh, strange that, isn't it? the idea that a Head is there because of their students, and not because of the letters after their name. Letters, I add because it's relevant, that are the same as 90% of their own teaching staff. I think that I am somewhat evangelical about the motivation of teaching, but I think that our profession is losing a lot of selflessness on the way. I really hate the savage careerism that is being written into the education lexicon. This is why I don't like the rubric of schemes like TeachFirst, because they press teaching as a viable alternative to big city careers. It isn't It's not an alternative because it isn't the same. I have no problem with people who want to be bankers and accountants and middle managers (actually I do, but not in the way I don't like TeachFirst), but teaching is not the same, in the same way that teaching is not the same as being a paramedic or a volunteer firefighter. Teaching is about children, not you. It's not about the letters after your name or how big you can print the letters of your name on a great big sign on a great big trunk road. Do you even need your name there? No. What you need is the phone number of your school so that you are accessible, and if you really want to brag about qualifications, brag about the ones that you students get.